" Room for whoever is looking at the image to interpret as they will."

I was an academic for most of my life, teaching and researching medieval visionaries, particularly the twelfth century abbess Hildegard of Bingen—composer, poet, theologian, healer—who produced a series of magnificently illuminated manuscripts explaining the universe and the role of human life in what she saw as the divine plan. She saw creation as ‘a poetry of science.’ a celestial harmony that could be experienced through the senses. Her term for nature’s creation was ‘greening’ (Latin: ‘viriditas’). Her redemption and celebration of the senses, condemned by many of her contemporaries, eventually brought me to painting, a creating that for me is also a poetry of science.

I learned about art during the years I lived in Berlin and visited cathedrals, museums, villages, and ancient sites throughout Europe. I am most drawn to the German Expressionists (especially Kirchner), whose work I saw as often as I could in the Brücke Museum in Berlin. I will be learning the science of painting—composition, light and shadow, color theory, paint application—as long as I live. I write poetry and love words, love distilling expression to its essence. Expressing the feel, or the essence, of what I see or want to present using paints, colors, and textures is for me the poetry of painting.

I am inspired by the German Expressionists. I want to capture faces, speak in pictures. I like inks and watercolors because they are moments caught—like poems. They allow me to make statements, contrasts, soften for shadows—make a painting live simply by adding water. Sometimes I begin by blackening an entire background, letting face or figure emerge from darkness. Again, about contrast.

For larger paintings in color, I use oils, not much medium. I start with raw sienna, paint in darks, lights, shapes; slowly add layers of color to fill the canvas. I like the small pieces because there is often a lot of open space—not filled in, not determined. Room for whoever is looking at the image to interpret as they will. 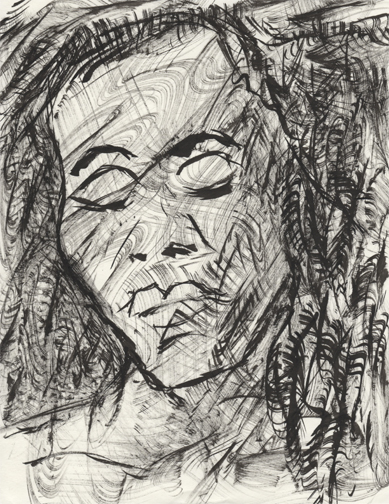 ” Each time I paint a face, I capture something new. “

Jan Emerson grew up in Indiana and studied at Indiana University (BA) and the University of Massachusetts (MA). While living in Berlin, she saw an exhibition of Sanskrit manuscripts that sparked her fascination with older languages and eventually led to her Ph.D. from Brown University in German and Medieval Studies. It was not until she lived in Germany and travelled throughout Europe in the 1970’s and 1980’s that she was introduced to and fell in love with art.

She taught at the University of Oregon and Reed College. As an associate at the Center for the Study of Women in Society at UO, she published on the medieval visionary and composer Hildegard of Bingen. She now lives, paints, and writes in New York City.

She studies with figurative realist Mary Beth McKenzie at the Art Students League of New York. She also studied with McKenzie at the National Academy, with Terence Coyle and Costa Vavagiakis (League), Paul Fortunato (School of Visual Arts), and Adam Grosowsky (Eugene, Oregon). She has published poetry in the online journal First Literary Review–East and in print in Brevitas anthologies.